weekly newsletter of the Yemeni embassy in Berlin 2.9.2019 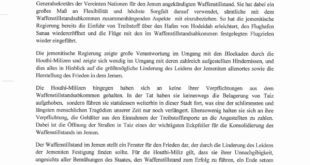 Embassy of the Republic of Yemen

The defence ministry and chief of staff condemned UAE air strikes against the legitimate forces in the interim capital of Aden and Zinjibar, the capital of Abyan province, that killed and wounded more than 300 army officers and troops and civilians.

The UAE carried out ten air strikes against government forces in the two cities, they said in a statement, holding the UAE fully responsible for the deliberate, blatant attacks that violated international laws and norms and the objectives of the Saudi-led coalition.

Army advances in heart of Sa’ada

The army forces with support from the Arab coalition launched a qualitative attack on positions and fortifications of the Iran-backed Houthi militia in the mountains of Gharabah and Al-Jirbah in the district of Al-Safra’a in Sa’ada province after repelling an attack by the militia in those areas.

In the district of Kitaf in the east, the army forces liberated a number of hills around the district’s centre after an attack on positions of the militia, coinciding with coalition air strikes on militia reinforcements that were on way to the district.

The army forces launched artillery shelling on positions of the Houthi militia in the area of Al-Rubai’e in west of Taiz city killing and wounding a number of militiamen and destroying some of their vehicles.

The shelling coincided with fierce battles between the army forces and the militia in the area of Al-Zonouj and the 40th Street in which a number of militiamen were killed and injured.

In Dhale province , five Houthi members of the Iran-backed rebel Houthi militia were killed and three others including field leader Abu Haydar injured in an ambush by the popular resistance in in the Ras Shib Adanah in the area of Nawah.

The leadership of the Ataq army command announced that the defence ministry has started including members of the Al-Shabwani elite forces in the national army under instructions by president and commander-in-chief of the armed forces Abdrabbu Mansur Hadi.

It confirmed that the completion of numbering these forces will require paying them after the members of the national army.

The presidency of the republic of Yemen renewed its call on Saudi Arabia to intervene and stop flagrant UAE interference in Yemen through backing militias of the southern transitional council and conducting airstrikes against the national armed forces.

In a speech, president Abdrabbu Mansur Hadi said: „Our fateful battle is a battle to defend the unity and stability of ancestral home and the future of our grandchildren in a fair and federal Yemen. Our need to our brothers within the Arabs‘ battle against Iran should not be a gateway to dividing our country or losing an inch of our soil. Our dignity and lives are for protecting and defending our land and its sovereignty“.

„Regrettably, the United Arab Emirates has taken advantage of the current circumstances to incite militias of the southern transitional council against the state institutions,“ he added, ordering all state institutions to take necessary measures on all levels to face this blatant attack against the country and the safety of its unity and sovereignty.

Government: strict measures over presence of UAE in Arab coalition

The council of ministers discussed in an extraordinary meeting orders by president Abdrabbu Mansur Hadi to take necessary measures to face armed rebellion by militias of the UAE-backed southern transitional council and shocking violations these militias are committing against citizens.

It approved  a package of measures and recommendations to the president including the stance of the government towards the role and presence of the UAE in the pro-government Arab coalition, affirming that the government under all circumstances will not accept to detract the sovereignty and unity of Yemen.

In addition, the council refused false justifications by the UAE to cover its flagrant attacks on national army which is doing its constitutional duty to defend the integrity and unity of Yemen’s land, and to fight terrorism in accordance with the UN charter and international laws. It said the government is still and will continue to be an effective partner of the international community in the war against all forms of terrorism and extremism, and that attempts of the UAE to link the national army to terror are just a desperate bid to cover UAE illegitimate attack on the heroes of the national army.

Continued UAE supply of heavy weapons of the STC’s militias is considered an insistence on undermining the legitimate and constitutional government and a support to a rebel group in violation of the objectives of the Arab coalition and international resolutions including the resolution No 2216, it said.

Al-Eryani: killings based on identity will not go unpunished

Information minister Muammar Al-Eryani said field reports from Aden and Abyan exposed the size of crimes and violations committed by militias of the southern transitional council during the past days including killings based on identity and executions of war prisoners and wounded soldiers, raids on and burning houses, abductions and shocking arrests foreshadowing a humanitarian disaster.

These terrorist crimes and appalling violations documented by videos revealed deep hatred and real face of the STC militias and destructive project these militias endure for southern governorates, he said, adding, „These are war crimes that are not subject to statute of limitations. All those responsible will be held accountable before national and international courts“.

He called on the international community, the United Nations Security Council, the UN envoy to Yemen and human rights organisations to condemn such crimes and to intervene to protect civilians and stop all crimes and acts of revenge exercised by the STC’s militias in the provinces of Aden and Abyan.

Human rights ministry revealed that militias of the UAE-backed southern transitional council have killed and wounded 300 civilians, including children and women, during raids on houses and hunts in Aden and Abyan cities.

They also killed 11 wounded soldiers who were receiving treatment in hospitals in the two cities, it said in a statement, adding that it got reliable information that militias stormed a dormitory of students fromShabwain Aden and hunted and arbitrarily arrested citizens in streets.

Local sources in Dhamar province said members of the Iran-backed rebel Houthi militia raided houses of civilians in the village of Nashal in the district of Al-Hada.

The militiamen inspected houses, stole properties of people, and abducted a child and took him to an unknown place, the sources said.

The Iran-backed rebel Houthi militia renewed its tank and artillery shelling on the 22nd May Hospital in Hodeida province, damaging a large part of the hospital.

In the district of Hays in south of the province, four civilians including an old man were injured when the militia launched artillery shelling on residential areas.

258 human rights violations committed by militia in one week

The Yemeni network for freedoms and rights said in its weekly report the Houthi coup militia committed 258 human rights violations last week, including 11 killings of civilians during indiscriminate shelling, sniping and planting landmines in the provinces of Taiz, Hodeida and Ibb.

The network said it had documented indiscriminate attacks by the militia on residential areas in the provinces of Taiz, Hodeida and Dhale, that resulted in the wounding of 18 people, mostly children, displaced more than 75 families and damaged private properties and houses.

The Yemeni journalists syndicate condemned the abduction of journalist Ihab Al-Shawafi by the Houthi coup militia at a checkpoint in Taiz city.

It said it received a report Al-Shawafi was abducted as he was travelling to the capital Sanaa, holding the militia responsible for the safety of the journalist and urging to release him immediately.